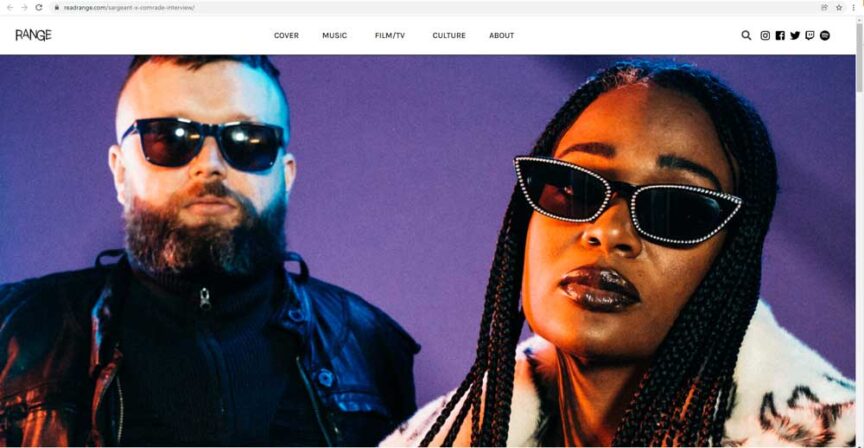 In the fast moving musical landscape of today where old-school doesn’t always retain the same freshness or cultural cache that it once did, Calgary-based duo Sargeant X Comrade are committed to blowing the dust off what came before them while bridging the gap between old and new.

Vocalist Yolanda Sargeant’s contemporary and dynamic soulful stylings collide with producer Jay Bykovets’ lifelong love of old-school hip-hop, but Sargeant X Comrade are pulling much more than old styles into a modern context on new album, The Elephant In The Room. Legendary figures like the late Gift of Gab of Blackalicious fame intermingle with rising talents on their features list, while familiar classics are repurposed with updated lyrics.

In the past, the duo has collaborated with other hip-hop stalwarts like Kool Keith and Planet Asia, paying homage to their personal heroes. “These days, the old school cats get forgotten pretty quickly, it’s more of a throwaway culture,” Bykovets says. “They’re the ones who paved the way, and we think we need to show respect.”

Combining familiar voices with local talent like Edmonton rapper K-Riz and Shampane Di Topbanga keep the duo’s message of bridging cultural and generational gaps alive with an eclectic mix of soul, jazz, boom-bap, dancehall, and even a little opera —  all adorned with a dusty vintage crackle. “It might be a sound that you’ve heard, but then we remix it in our own way,” Sargeant says. “Duke Ellington says that one day there’s going to be a time when there’s no genre. If you start to think outside the box, you realize that everything is a box. But we just want to be free.

The outsider perspective to their craft might have something to do with their origin stories starting on opposite sides of the world; Sargeant has Caribbean heritage, while Bykovets was born in Russia. Over the phone, Bykovets is calm and precise as he explains his musical methods. Sargeant, on the other hand, often catches herself wondering whether she’s revealing too much, interspersing her rapid-fire brainwaves with an infectious cackle and freestyle raps about Babar the Elephant. But when a topic excites them, they end up finishing each other’s sentences.

Sargeant in particular values an all-inclusive musical mixture to celebrate and reclaim the nagging sensation of feeling like an outsider that has followed her throughout her musical journey. Part of a touring children’s choir from an early age, she recalls being put down by peers after gaining the confidence to get up on stage. Her later interest in punk rock meant she often found herself receiving quizzical stares as the only person of colour in the room. “We try to stay positive and push a message of unity, and people waking up to see the value within themselves,” she says. “I think that’s what’s lacking today.”

Much of what makes Sargeant X Comrade’s music so refreshing is their somewhat unstructured and intimate approach, many of their tracks feel like an on-the-spot effortless jam session about whatever was on their minds that day – something that Bykovets refers to as “the magic.” To add to this magic, Bykovets enjoys scouring for unexpected samples to build around. Many still possess a personal twist. He names the score of a 1960s Soviet movie and encrypted radio transmissions from the Cold War era as some of his favourite discoveries to pop up on this latest project.

Sergeant X Comrade also give a modern-day lyrical update to Gil Scott-Heron’s legendary “The Revolution Will Not Be Televised,” the rap pioneer’s message still ringing true today. The album’s title, The Elephant in the Room, ultimately becomes twofold – not only does it refer to the social issues that get swept under the rug, but both Sargeant and Bykovets report having felt like the famously ignored elephant themselves, dedicating their work to all the other elephants listening. “There’s a lot of elephants out there,” Bykovets says with a chuckle. “So many people feel so alone, but if you feel like you’re the only elephant, there are ‘elephants’ in the room,” Sargeant adds.

Regardless of what kind of elephant you are, Sargeant X Comrade hope that their work helps you to find your herd.