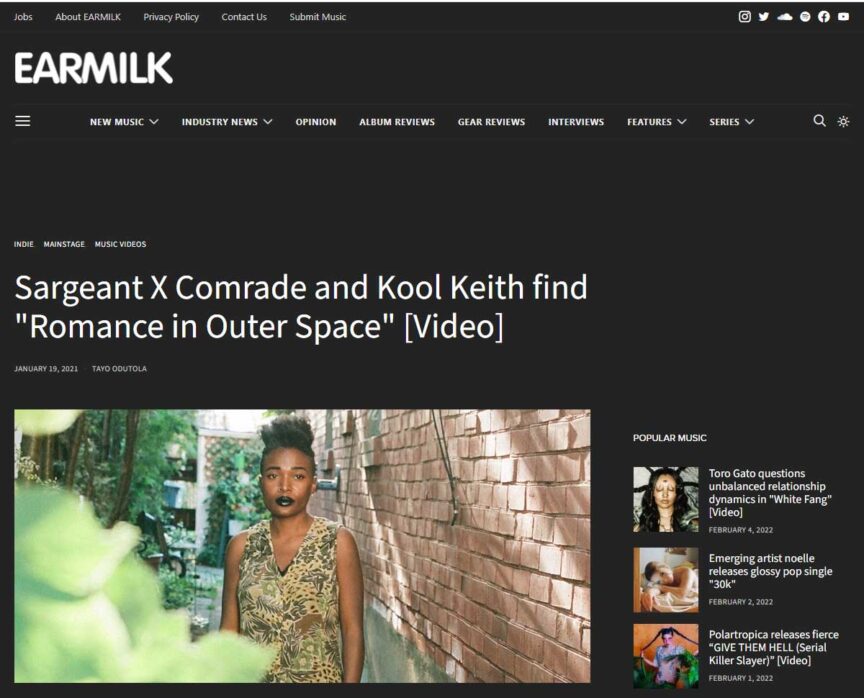 Republished from original article at: https://earmilk.com/2021/01/19/sargeant-x-comrade-and-kool-keith-find-romance-in-outer-space-video/

Self-described ‘Lo-Fi Soul’ music Canadian duo Sargeant X Comrade recently debuted their first project, Magic Radio, which showcased their forward-thinking style. The project which featured names such as Moka Only, Planet Asia, and more gets its first visual in the form of the Kool Keith assisted single, “Romance in Outer Space.” The track is a smooth, soulful piece that blends experimental hip-hop, lo-fi sounds, and neo-soul sensibilities as frontwoman Yolanda delivers an emotion-filled performance. From the punchy sparse backdrop to Yolanda’s vivid imagery that centers on love beyond the galaxies and stars, the record aims to take listeners to a whole new frontier and experience. The legendary Kool Keith also peppers the track with his unique offbeat style that he is known for.

The Evgeniy-directed video is as eclectic as they come and really taps into a retro-styled aesthetic. From the intentionally cheesy effects and use of ’80s computer graphics, we get taken to an alternate past on this nostalgia-inducing clip. The visual also comes with an extended outro featuring DMC champion DJ WeezL who displays his skills over an atmospheric instrumental.

“Romance in Outer Space” is from Sargeant X Comrade’s Magic Radio LP, which you can get here.